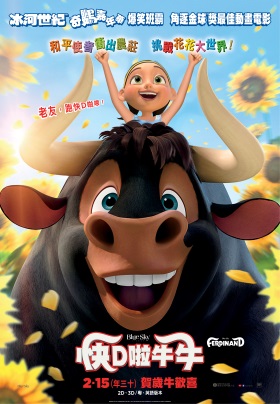 Ferdinand centres on the adventures of a peace-loving bull, who is adopted by a loving farmer and daughter. However, his happy life changes after he’s mistaken for a vicious beast and is taken away to the last place on earth he wants to be, a bull training camp.

But Ferdinand is determined to get back home. Along the way, the kind-hearted bull makes many friends and changes the lives of those he meets. But there still one great obstacle he’ll have to overcome…

Built to fight. Born to love.

The tale of Ferdinand, a giant bull who prefers flowers to fighting, has captured the hearts of millions since it was first told in the 1936 book The Story of Ferdinand by author Munro Leaf and illustrator Robert Lawson. The book has been translated into more than 16 languages, and is included on TIME's 100 Best Children's Books of All Time.

A warm and charming take on how appearances can be deceptive (or, why you should never judge a bull by its cover…) the book’s message of love and acceptance has resonated for decades.