Last Modified: 02/08/2017
[Your browser does not support frames or is currently configured not to display frames. Please use an up-to-date browser that is capable of displaying frames.] 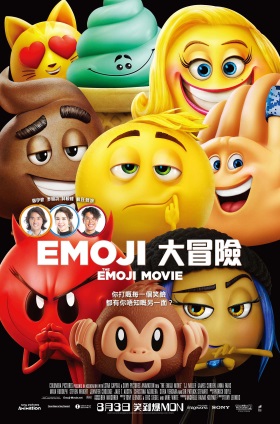 Human beings have never been more connected. With the smartphone, we are never out of touch from each other – and constantly in touch with people around the world. And with a simple invention, we are now able to communicate with people who are separated from us by language, borders, oceans…

…after all, everyone knows what 😃 means.

At the centre of The Emoji Movie is – no surprise – a phone, belonging to a teenage boy named Alex. And at the centre of his phone is Textopolis, where all emojis live.  Textopolis is a hustling, bustling community 🌇 that serves only one purpose: to help Alex communicate. They wake up in the morning, go to their jobs, and each emoji has a central and very important role to play.

In this world, each emoji has only one facial expression - the single emotion that they are meant to express. No matter how they might be feeling inside, Smiler’s always got to be smiling, Crier always has to cry even if he just won the lottery, and Christmas Tree has got to be… Christmassy 🎄.

There is one exception, though. Gene, an exuberant 😜 emoji, was born without a filter and is bursting with multiple expressions 😂😡😱😍. Determined to become ‘normal’ like the other emojis, Gene gets help from his handy best friend Hi-5 and the notorious code breaker emoji Jailbreak.

Together, they embark on an epic ‘app-venture’ through the apps on the phone 📱, each its own wild and fun world, to find the Code that will fix 🔧 Gene. But when a greater danger ⚠️ threatens the phone, the fate of all emojis depends on these three unlikely friends who must save their world 🌏 before it’s deleted forever.

In a world populated by emojis only expressing one emotion, an emoji with every expression would be very threatening. Not coincidentally, in our world, being different is sometimes threatening to other people.

Gene feels like he’s broken – not just different, but broken – and could be fixed somehow. As he goes on this journey to ‘fix’ himself, he realises that he’s not broken at all – the thing that makes him different makes him stronger.

Gene’s journey has real-world complications. Alex has been trying to get the courage to text a girl he likes – and if he doesn’t send the right emoji, it could spoil his chances forever. When Gene’s journey puts the phone on the blink, Alex starts to believe that the only solution is to wipe his phone… and everyone in it.

Gene’s journey takes him through several of the world’s most popular apps – including Candy Crush Saga, Dropbox, Instagram, Just Dance, Spotify, Twitter, WeChat, and YouTube – with each app becoming its own distinct world as the three emojis make their way to The Cloud. Popular apps Crackle, Facebook, Shazam, Snapchat, and Twitch also appear in the movie.

Every app challenges Gene and moves him forward on his journey, and also a widely known, interesting app that a kid would have on their phone.  That’s how Gene’s adventure through these apps is merged with a story about communication and a little guy who just feels different.