Last Modified: 14/07/2017
[Your browser does not support frames or is currently configured not to display frames. Please use an up-to-date browser that is capable of displaying frames.] 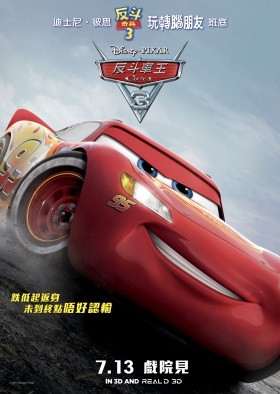 Lightning McQueen is a world-champion racer. Suddenly, he finds himself faced with a new generation of racers who threaten not only his dominance in the sport—but the confidence that got him there.

He makes a major mistake, which results in a dramatic crash and a lot of time for self-reflection. Lightning’s first reaction is that he wants to do whatever the next-gen racers are doing to get back in the game.

He turns to a tech-savvy trainer at the all-new Racing Center. Cruz Ramirez is a top trainer in racing. She takes on Lightning as her ‘Senior Project’ and calls it like she sees it: he’s older now, which he doesn’t want to hear, but certainly needs to hear.

As Lightning McQueen struggles to get back on top, his explorations lead him to a group of characters who represent the roots of stock car racing.

Lightning decides to return to his own roots—recalling the wisdom passed to him by his beloved mentor, the late Fabulous Hudson Hornet, aka Doc Hudson. He thinks if he can just harness what Doc taught him, he’ll find whatever it is that he’s missing. Ultimately, he turns to his coach’s coach, Smokey, for guidance and inspiration.