Father's Day falls on the third Sunday of June every year. Although no one is certain, this festival probably started in the United States. In 1909, Sonora Smart Dodd (Mrs John B. Dodd) wanted to set up a Father's Day to honour her father, William Smart.

Mrs Dodd was proud of her father, who fought in the Civil War and raised six children after his wife died in childbirth. She asked church ministers to have a church service dedicated to fathers. But it was not until 1966 that President Lyndon Johnson officially made the third Sunday of June Father's Day in the United States.

Nowadays, people in many countries celebrate this festival. Unlike Mother's Day, people seldom buy flowers on Father's Day. What would you give to your father on this day? 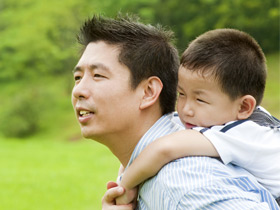 We’ve also gathered some quotes about fathers. Which ones do you agree with most (and which ones not so much)?

The father who does not teach his son his duties is equally guilty with the son who neglects them.
- Confucius

I could not point to any need in childhood as strong as that for a father's protection.
- Sigmund Freud

A good father lives so he is a credit to his children.
- Arnold Glasow

One father is more than a hundred schoolmasters.
- George Herbert

The most important thing a father can do for his children is to love their mother.
- Theodore Hesburgh

What a father says to his children is not heard by the world, but it will be heard by posterity.
- Jean Paul Richter

Fathers should be neither seen nor heard. That is the only proper basis for family life.
- Oscar Wilde

Dads are most ordinary men turned by love into heroes, adventurers, story-tellers, and singers of song.
- Pam Brown