Last Modified: 10/04/2017
[Your browser does not support frames or is currently configured not to display frames. Please use an up-to-date browser that is capable of displaying frames.] 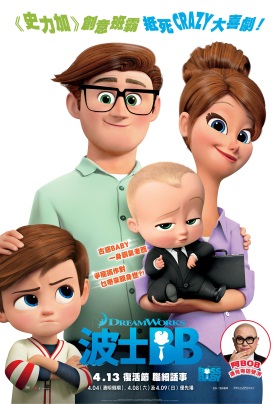 There’s no question who the boss is in this family.

From the day his baby brother, the most unusual Boss Baby arrives to Tim's home in a taxi and wearing a suit, seven-year-old Tim knew this fast-talking, briefcase-carrying baby was trouble – after all, there’s only so much love to go around, right?

But as Tim embarks on a mission to win back the sole affection of his parents, he discovers that Boss Baby is actually a spy on a secret undercover mission, and only he can help. There is a secret plot that threatens to destroy the balance of love in the world!

Now, the sibling rivalry between the two brothers must be cast aside, and the pair must come together as true brothers to stop the evil scheme, save their parents, restore order to the world, and prove that love is indeed an infinite force.