The Space between Us

Last Modified: 23/02/2017
[Your browser does not support frames or is currently configured not to display frames. Please use an up-to-date browser that is capable of displaying frames.] 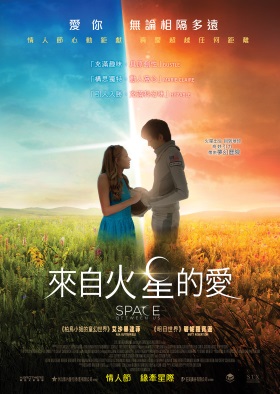 In this interplanetary adventure, shortly after arriving to help colonise Mars, an astronaut dies while giving birth to the first human born on the red planet. Thus begins the extraordinary life of Gardner Elliot – an inquisitive, highly intelligent boy who reaches the age of 16 but has only met 14 people in his very unconventional upbringing.

While searching for clues about the home planet he’s never known, Gardner begins an online friendship with a street smart girl named Tulsa. When he finally gets a chance to go to Earth, Gardner joins with Tulsa on a race against time to unravel the mysteries of how he came to be, and where he belongs in the universe.

Mars is about half the diameter of Earth, and it therefore has about 3/8 of Earth’s gravity. That means that if you were strong on Earth, you could be even stronger for a while on Mars. When he returns to Earth, Gardner Elliot feels like he weighs the equivalent of 300 pounds!

Also, being in reduced gravity, as far as we know today, would have a dramatic effect on a young child that had not fully developed and would probably result in enlarged or altered internal organs, and a different bone structure.

We know when astronauts go to the International Space Station or a shuttle that they have lost muscle mass. They have lost bone density. But if someone were to grow up in that environment, it would probably result in a lot of physiological changes.