10 ways to say goodbye in English

Do you always say 'goodbye' when you are leaving? Are you tired of saying 'goodbye'?

Here are 10 English phrases and expressions you can say instead of just the plain old 'goodbye': 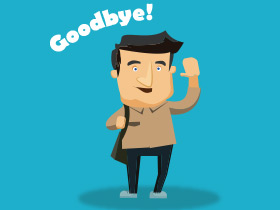 There are a lot of different ways for saying the same thing in English. Try using the above expressions to change your boring 'goodbye' and turn it into something friendlier or more interesting!
Keywords
everyday Englishfor funintermediateKS3KS410 ways to...KS2beginner