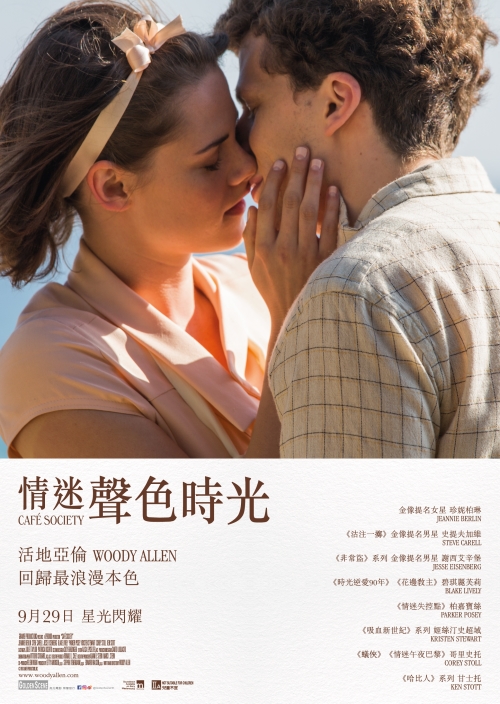 Set in the 1930s, Woody Allen’s bittersweet romance follows Bronx-born Bobby Dorfman to Hollywood, where he falls in love, and back to New York, where he is swept up in the vibrant world of high society nightclub life.

As the story begins, Bobby sets out for Los Angeles, hoping for something more interesting than working in his father’s jewellery store. At Hollywood, he works for his high-powered agent uncle Phil. He soon falls for Phil’s charming assistant Vonnie, but as she’s involved with another man, he settles for friendship.

When Vonnie’s boyfriend breaks up with her, Bobby seizes the opportunity, and she ultimately returns his affections. When he asks her to marry him and move to New York, she is tempted, but things do not go as smoothly as planned.
The love story at the heart of the film is bittersweet. The characters wonder about the choices they have made and the paths their lives have taken.

‘Cafe Society’ refers to the socialites, aristocrats, artists and celebrities who gathered in fashionable cafes and restaurants in New York, Paris, and London in the late 19th and early 20th Century. The term became popular in New York City in the 1930s. There were dozens of dazzling clubs in New York City at the time, including some with 50-piece orchestras. The era fascinated Woody Allen, writer and director of the film, who thinks it was one of the most exciting times in the history of the city, with tremendous theatre life, café life, and restaurants.